v7, like the v3 never made it to market; We’ve finished the v8 and now some modifications to the insert in the zip travel case.

Our new shop is much more closely affiliated to us and is assembling the v8, after the shop doing v7 sabotaged the output then notified us he would not complete the understanding we’d reached. His mistake. We used his shop for assembling the original v4 in 2006. v8 is done by yet a new assembly shop.

V8 is the culmination of all we’ve learned over 20+ years and contains the best of the v6 Modes with improved board design so ‘hotspot” on bottom of v6 controller is gone (old shop said would correct but didn’t), screen/diode color corrected (old shop said would be correct but didn’t), new electromagnet metal parts increase strength, controller enclosure and cables nicely improved as well.

Due to inventor’s preferance for 9.6 Hz (since before the first working prototype Summer 2002) all v4 / v5 Programs are gone. They’re not necessary. We want our clients sleeping on 9.6 Hz.

Inventor previously had studied Royal Rife and did his Rife pad device in 1997 after he’d been exposed to Bob Beck’s Silver Pulser in 1996. Our inventor investigated himself on the history of using ‘fields’ to improve health on a relatively new internet and a 28.8 baud dial-up modem..

Inventor favored 9,6 Hz due to a radio interview he heard in late 1996 where Bob Beck reported 9.6 Hz as the pulse created by the planet .He discovered and recorded this by setting one metal rod down about 20 feet as an antenna, then amplified what it “picked up” and metered it for frequency. Curiously, Beck never used 9.6 Hz for anything. He should have.

He kept the Rife square wave on the EarthPulse™, so the steeply rising magnetic field (nanosecond on the digitals) would induce a microampere (microcurrent) charge in tissue when close to the electromagnet. Entrainment for sleep was not considered at the time. It was not known at the time that the general population was not sleeping well until some time in 2006 when the National Sleep Foundation did their study showing this across the globe in all age catagories.

Summer 2002 inventor had an on/off ANALOG (not digital as used since 2005) that may or may not have been exactly 9.6 Hz and worked on all of the nearly 20 people it was tested on. Every person but one fell asleep on the couch, in the daytime. The one that didn’t was very anxious but ambulated quite a bit better after just a one hour session.

Our v2 circa 2003 picture is at Tech Specs page via that link.  Five o’clock is ‘9.6 Hz (or close to it). The circa 2003 image below shows the v2 analog device pretty nicely and shows that we’ve known of the same effects since the beginning. 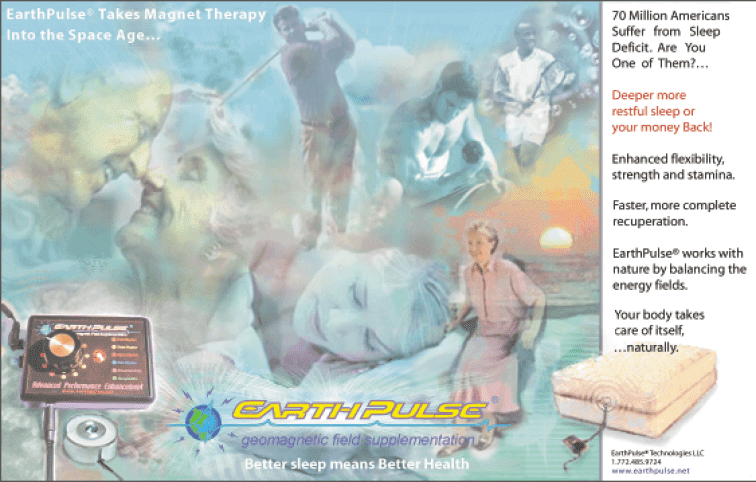 During his life, inventor could only hold his breath about 35 seconds. After a few years of use, his breath hold time got to 2:30+ minutes. Monitoring breath hold in clients for years, after 90 days a vast majority of client’s breath hold increased about 50% or more.

The Mitochondrial Theory of Aging in reverse, means More ATP and better oxygen use as you get older and better! To see our inventor at 62, 63 and 64 years old after 20+years of nightly use, you can hit that link above to the More ATP page. He’s amazed that he’s still growing in response to resistance training, and says the EP is way better than he’d known it was.

This is a good video on 9.6 Hz Inventor did at the start of the ’numerology’ he discovered about 9.6 in 2012; the video was recently discovered. Some of the numerology is contained on this page Why 9.6 Hz? .

More complete 9.6 numerology in Platonic Solids & almost all Sacred Geometry is in the free PDF, PYTHAGOREAN & PLATONIC PEMF we give free for subscribing to our newsletter or by purchasing a device. Hit the ‘Subscribe’ link on the top Nav bar, far right if you’d like to subscribe. If you’ve never read it you can also request a copy by contacting our client support through the link in the top navbar.

V8 has a DIGITAL 9.6 Hz Mode. v8Human has an adjustable timer and finishes at end of timer with 30 minutes of 14.4 Hz Alert Mode to wake user BEFORE actually waking up. Alarm clock simply brings user to consciousness.

There is a Tesla Mode on v8Human using 3.69 Hz to help retrain even the worst sleepers at first. The goal is using the 9.6 Hz Mode that inventor uses exclusively since v5 in 2015. There was a Tesla 1 mode on v6, at 9.63 Hz but inventor discovered 9.6 Hz was better. It is gone.

2002 – 2004 were analogs made in America, so exact frequency may or may not have been exactly 9.6 Hz. These digitals are precise and a lot more powerful. The numerology shows that decimals matter. Digital 9.6 Hz is tight and perhaps infinitly better than what we had during the analog years 2002 – 2004.

The v8Pet is not adjustable; runs 9.6 Hz start to finish for 12 hours. Two pets?,…get a splitter and 2nd magnet.  Animals do not need a wake up function. Short on cash as most are these days?  v8Pet will work fine for a human, albeit no adjustable timer or wake up function.

All our v8 systems are greatly simplified and significantly lower priced due to the World Wide Depression bearing down on all of us. Hopefully a kinetic World War or nuclear war is not in our future.

However long you’ve been waiting for delivery, we promise it’ll be more than worth the wait.

A refund reflecting the price paid and the current price (after our necessary price increase) will be made a few weeks after delivery of the system. Refunds will have to be made bank to bank. We no longer use PayPal or any U.S. based ANYTHING. No BigData either..

We appreciate our valid customers and since Monday of Christmas week December 2021 invalid buyers have been attacking at increased rate. Ask yourself what is so good that the criminals are attacking it so less people will know of it?

WORKS WE HAVE DONE

Data attributed to our research is never intended to recommend our technology as a therapy, drug or diagnosis for any illness or disease condition; nor as a product to eliminate disease or medical condition; nor has it been evaluated by U.S. Food and Drug Administration or any governmental health agency.

Worldwide, no governmental bodies recognize the need to enhance natural magnetic fields. EarthPulse™ PEMF is not intended to be used to diagnose, treat, cure or prevent any disease. It will improve sleep or return it in 90 days since 2002.